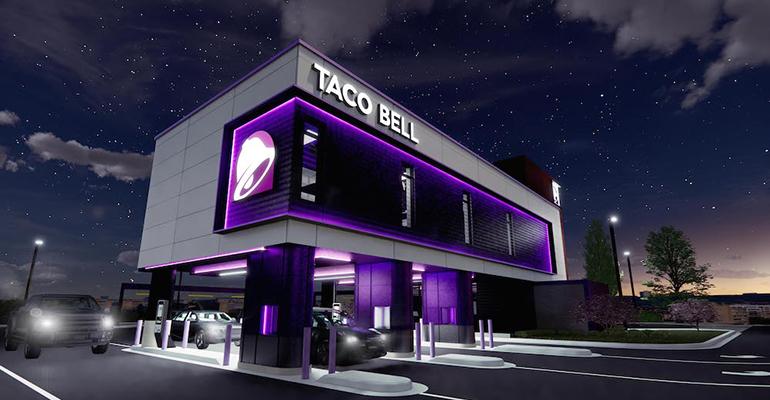 From NRN August 2021 — Taco Bell on Thursday unveiled its newest store design promising to be the speediest unit yet.

Dubbed the Taco Bell Defy — because it will “defy norms and define the future” — the new design set to break ground in Brooklyn Park, Minn., later this month will be a 3,000-square-foot, two story restaurant with four drive-thru lanes. Three of those lanes will be dedicated to mobile or delivery order pickups, the company said.

Developed in partnership with 35-year franchise operator Border Foods, the new Defy location was designed by Minneapolis-based Vertical Works Inc. It will be the franchisee’s 230th Taco Bell and 82nd new restaurant build, though it’s not scheduled to open until summer 2022.

Though the Defy design will be among the smallest in terms of footprint, the restaurant is expected to serve more customers, reimagining a frictionless drive-thru experience, the company said.

Digital check-in screens will allow mobile order customers to scan their order via a QR code, then pull forward where their food will be delivered by a contactless proprietary lift system. Two-way audio and video will allow customers to stay in touch with team members in real time.